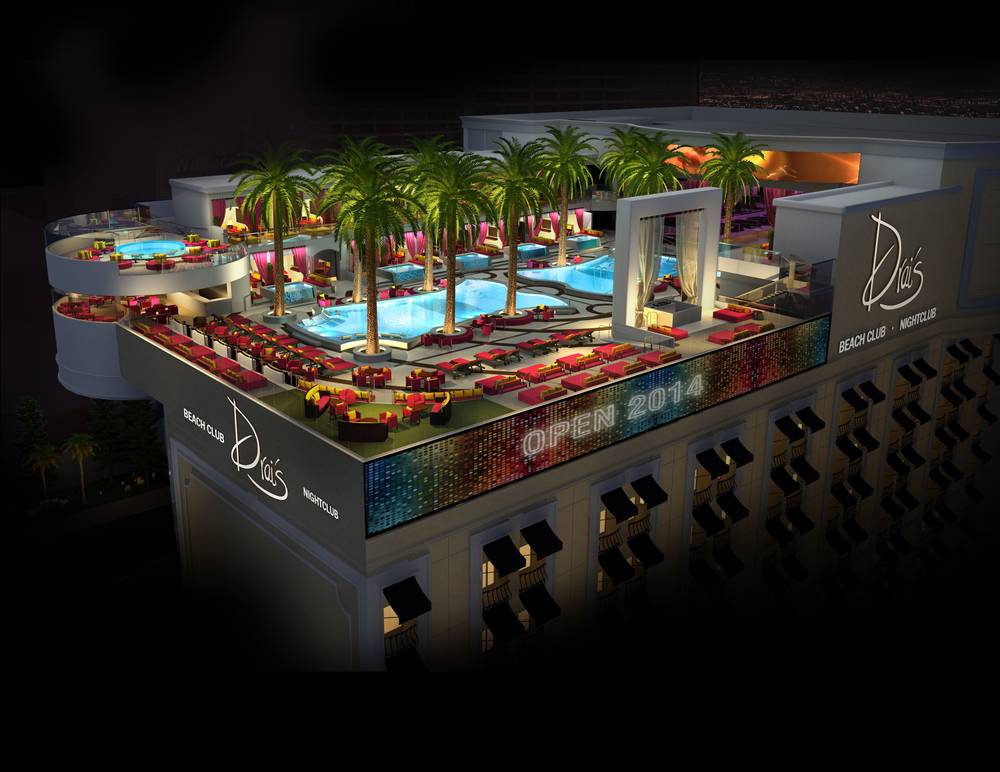 After closing to accommodate the renovation of Bill’s Gamblin’ Hall, the famous nightlife brand will return to the Strip’s busiest intersection this Memorial Day weekend.

Positioned on the rooftop of the new 11-story Cromwell boutique hotel, Drai’s Beach Club and Nightclub will have the capacity to welcome up to 4,500 guests in the 65,000-square-foot space.

In true Vegas style, the $85 million megaclub will be open around the clock, offering a pool party experience from sun up to sun down and a complete nightclub experience for the hours in-between.

Victor Drai, the man behind Drai’s and the original visionary for XS and Tryst, says this will be one of his best creations yet.

“We are creating a 360-degree experience,” said Drai in a press release. “Wherever you turn, you will be awed by the design, the technology, the music, the service and, most importantly, the experience. We have designed the club to be visual, sensual, sexy and social.”

Drai’s will span two levels. Guests will enter on the eleventh floor, allowing them to overlook the entire club before descending a set of stairs to the full night and beach club on the tenth floor.

“It’s a one-of-a-kind concept with the best vantage point in the city. We’ll be the only club in town with unobstructed sun and fun from sunrise to sunset,” said Drai.

In addition to the rooftop experience, the popular Drai’s after-hours club (typically open from 4 a.m. until the early daylight hours) is also undergoing a slight renovation and will reopen in its original space in the hotel basement.

It’s unclear what musical talent will be spotted behind the rooftop DJ booth, but operations director Brian Affronti says they’ll feature a variety of music.

“The whole idea is to bring the party back to the nightclub and bring back the idea that the nightclub itself is the star,” said Affronti in an interview with Vegas Seven magazine.

“A lot of focus has been purely on the DJs at a lot of the other venues, and there’s a lot of branding toward the DJ as opposed to the venue, and we want to go back to branding the venue.”

Steve Lieberman, who’s helped design production elements for Electric Daisy Carnival and Ultra Music Festival, was tapped to do the same for Drai’s.

According to the Cromwell’s website, Drai’s is even designing a fireworks menu, allowing big-spending guests to choose a firework display to shoot off from the rooftop.

A restaurant curated by Food Network star Giada De Laurentiis will also be housed inside The Cromwell.