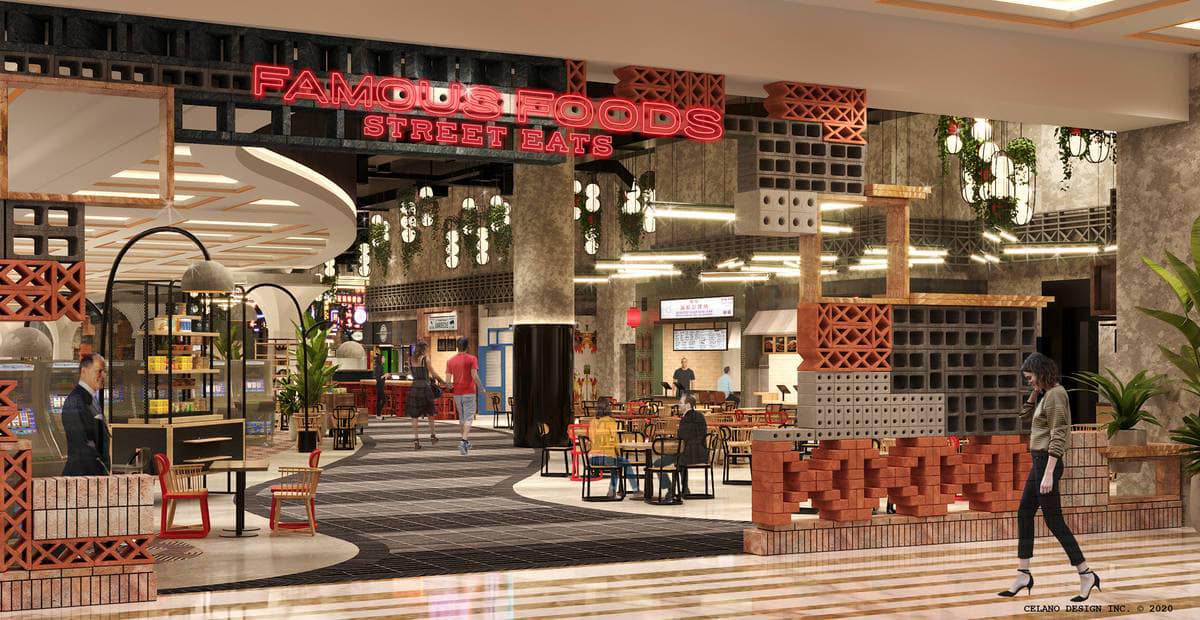 When it opens this summer, Resorts World will include a food hall featuring authentic street food and cuisines from around the world.

“Famous Food Street Eats” will occupy 23,000-square-feet and feature 16 unique food stalls from top chefs and restauranteurs. The resort boasts it will be the only destination in the country with the most Michelin Plate and Bib Gourmand Award concepts under one roof.

Famous Foods will also feature a 16-seat center bar with a self-pour beer system, and the “Here Kitty Kitty Vice Den“ speakeasy hidden within the depths of the food hall.

Zouk Group is developing the concept, who took inspiration from the lively atmosphere and culture at Southeast Asia’s most popular hawker centers. The space will feature a combination of stalls exhibiting Eastern and Western flavors, ranging from Thai beef noodles and Shandong dumplings to American fried chicken and Texas BBQ (see full list below).

Among the list is “Kuru Kuru Pa Yakitori,” created by Las Vegas resident DJ Steve Aoki and his restaurateur brother Kevin Aoki. The Japanese and anime-inspired concept will feature a variety of yakitori, kushiyaki, and yaki onigiri, along with a selection of signature drinks and mochi. Fun fact: Steve Aoki is son of Benihana founder, Rocky Aoki. 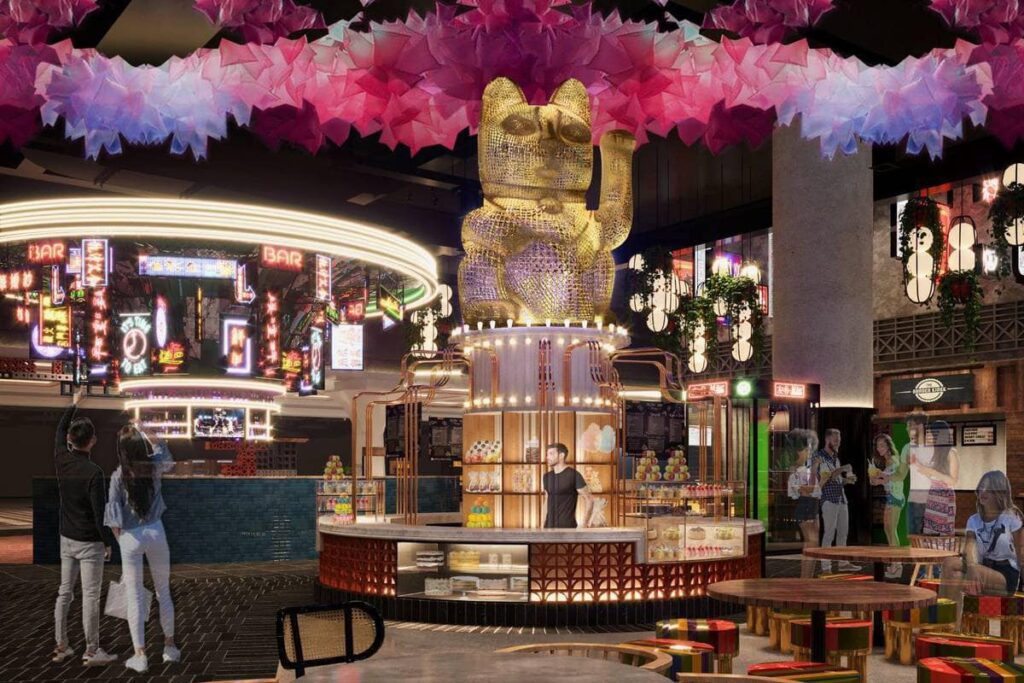 Aside from dining options, Famous Foods will be a spectacle itself, featuring floor-to-ceiling view of the Las Vegas Strip, vibrant neon signs and trinkets, and a 10-foot tall Lucky Cat sculpture made entirely of gold coins. The sculpture is being created by Red Hong Yi, popular Chinese-Malaysian contemporary artists. A second commissioned piece of her’s will be a mural made of 10,000 tea bags.

Food courts have always been a popular concept in Las Vegas, but they’ve evolved in recent years from hosting fast-food joints to showcasing more upscale flavors from some of the most popular eateries around the country. Look to The Cosmopolitan’s Block 16 Urban Food Hall for an innovation success story.

Resorts World has made the news most recently for booking Katy Perry for a residency expected to kick off later this year. J Balvin has also announced a three-day event in September. Resorts World’s Zouk Nightclub and Ayu Dayclub are rumored to have lured Tiesto and Zedd away from their longtime residences with Hakkasan Group.

Resorts World and their 3,500 rooms are set to open this summer, but an official date has yet to be announced. It will be the first new casino-resort to open on the Las Vegas Strip since the Cosmopolitan debuted in 2010.

FUHU Shack – FUHU Shack is a casual outpost of Zouk Group and Resorts World’s vibe dining restaurant, FUHU, serving up a western reinterpretation of one of China’s most desired dishes with Peking Duck Burritos.

Pepita’s Kitchen – Creator and owner of Pepita’s Kitchen, Dedet de la Fuente (or ‘Lechon Diva’ as she’s affectionately known) quickly made her mark on Manila’s local food scene with her exclusive 12-course private degustation dinners featuring her stuffed lechon creations that are commonly frequented by stars such as Martha Stewart and Adam Richman, and visited by the late Anthony Bourdain. Pepita’s Kitchen food stall will offer a sampling of the Lechon Diva’s delectable lechon staples.

Dessert – Serving an array of sweet treats from around the world, the dessert stall at Famous Foods will feature gourmet cookies, Instagrammable treats and pre-packaged goodies.

Mamak – The translation for a sundry store in Singapore, Mamak will sell merchandise, unique snacks and keepsakes including take-home food kits, books and more for guests to commemorate their experience. 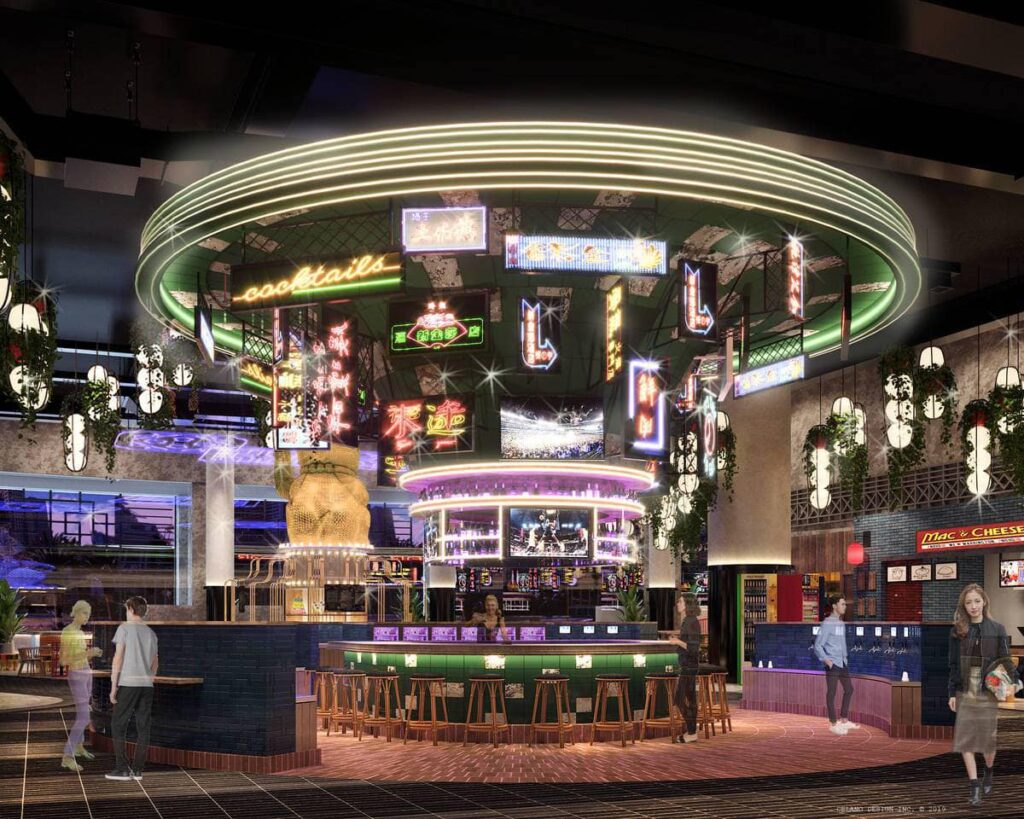 Kuru Kuru Pa Yakitori – Created by GRAMMY-nominated DJ and producer Steve Aoki and his restaurateur brother Kevin Aoki, this Japanese and anime-inspired concept will feature a variety of yakitori, kushiyaki and yaki onigiri along with a selection of signature drinks and mochi.

Blood Brothers BBQ – A critically acclaimed Houston hotspot that will serve up classic Texas barbecue with the occasional Chinese and Vietnamese twist.

Famous Foods Center Bar – A high-energy 16-seat center bar featuring an innovative self-pour and automated beer system that will offer a rotating selection of dozens of beers from around the world, along with cocktails and wines, all on tap.